Brighid Wheeler (she/her) is a programmer, producer, and film festival consultant. She received her BA in Film from the University of Alabama, with a focus on Documentary Filmmaking. Brighid is passionate about creating community through exhibition, having previously worked as Programming Director for Atlanta Film Society and Senior Programmer for Indie Memphis Film Festival. She has dedicated most of her career to uplifting the stories of Southern filmmakers. She currently serves on the Board of Film Impact Georgia and is currently the Program Director of the Tampa Bay International Gay & Lesbian Film Festival (TIGLFF).

As a dedicated member of the LGBTQ+ community, she is a vocal advocate for historically under resourced filmmakers. Brighid seeks to create cinema spaces that inspire conversations and foster a sense of belonging.  When she is not in a movie theater, serving on a festival jury, or on set, you will find Brighid cuddled up with her sweet blind Rottweiler, Biggie. (and dreaming of visiting SF again) 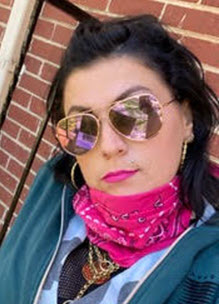