From St. Pete to Saint Petersburg 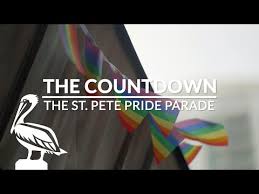 In the spirit of Pride Month, we present two documentaries that starkly contrast the state of the LGBTQ+ community in the U.S. and Russia.

The Countdown is a short documentary produced by the St. Pete City Council chronicling the preparations for last year’s Pride Week Parade and Festival which marked the 50th Anniversary of the Stonewall Riots.

A Worm in the Heart is a feature-length documentary filmed in six cities along the Trans-Siberian Railway, starting in Saint Petersburg where their annual pride parade led to violence and arrests and continues further into the heart of Russia where the resilient queer community continues to operate in secret and form underground support networks. When watched together, these documentaries create a profound appreciation for the freedom and liberties we have in the U.S. and remind us to vote in this election year to protect our rights.

Follow along as we break down the events leading up to the largest Pride celebration in the southeast. Diversity is St. Pete’s strength, and we’re thrilled to share the stories and hard work that create this special weekend of love + inclusion.

Shot in six cities along the Trans-Siberian Railway, this startling and ultimately inspiring documentary details the current state of the Russian queer community – giving both broad societal overviews and deeply personal accounts from activists and non-activists alike. The film follows Paul Rice and Liam Jackson Montgomery, a gay couple from Ireland, as they travel on the Trans-Siberian Railway, meeting with a diverse range of LGBTQ+ people-from Nobel Peace prize nominees and drag queens to those who have suffered brutal homophobic and transphobic attacks.