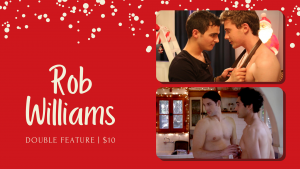 On Saturday, Dec 19 at 8PM we will hold an interactive Q&A with director Rob Williams and cast members from his films Make the Yuletide Gay and Shared Rooms.
The two films will be available to stream all weekend… Be sure to watch his films before the Q&A to get your questions ready to type into the chat window on our Eventive streaming platform!
Make the Yuletide Gay (from 2009) is about a gay student who is “out” at college but not to his family and he receives an unexpected visit from his boyfriend while at home during the holidays.
Shared Rooms (from 2016) is sort of like the “Love Actually” of the gay world. It features several interrelated tales of gay men seeking family, love and sex during the holiday season.
Tickets for the double feature and Q&A are $10. Purchase your ticket here: https://watch.eventive.org/tiglff