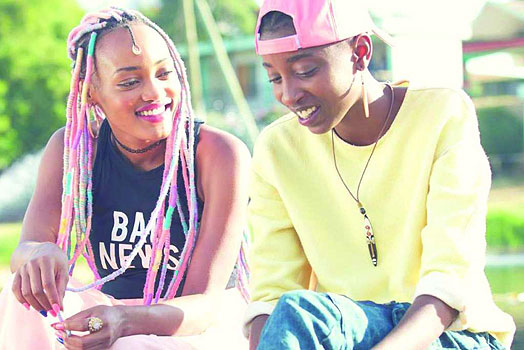 Rafiki (lit. ”Friend”) is a 2018 Kenyan drama film directed by Wanuri Kahiu. Inspired by Ugandan Monica Arac de Nyeko’s 2007 Caine Prize-winning short story “Jambula Tree”, Rafiki is the story of friendship and tender love that grows between two young women, Kena and Ziki, amidst family and political pressures. The film had its international premiere in the Un Certain Regard section at the 2018 Cannes Film Festival.

Rafiki was banned by the Kenya Film Classification Board (KFCB) “due to its homosexual theme and clear intent to promote lesbianism in Kenya contrary to the law”. The KFCB warned that anyone found in possession of the film would be in breach of the law in Kenya, where gay sex is punishable by 14 years in jail. The ban raised international outrage by supporters of LGBT rights.

The film’s director, Wanuri Kahiu, sued Kenya’s government, to allow the film to be screened and become eligible to be submitted as Kenya’s entry for the Academy Award for Best Foreign Language Film at the 91st Academy Awards.

On 21 September 2018, the Kenyan High Court lifted the ban on the film, allowing it to be screened in the country for seven days, therefore meeting the eligibility requirements. After the ban was lifted, the film was shown to a sold-out crowd at a cinema in Nairobi.  Despite the ban being lifted, it was not selected as Kenya’s submission in the Foreign Language Film category, with Supa Modo being sent instead.

We are honored to be screening this film before its release in April.