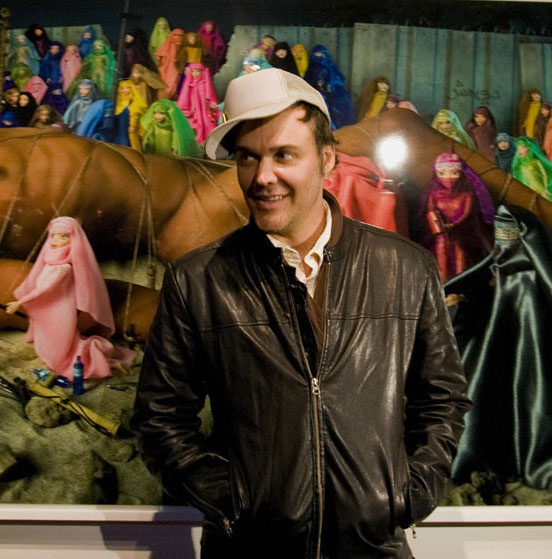 Florida Museum of Photographic Arts (FMoPA) will host its Watch PartTEA and Panel Discussion during Tampa Pride weekend on Sunday, March 27, 2022. The event starts with a screening of the documentary Eye Candy: The Crazy World of David LaChapelle, followed by a panel discussion on Inclusion Through Culture featuring the brightest stars of Tampa Bay’s LGBTQ+ community. The admission to the event is pay-what-you-wish. FMoPA is located on 400 N. Ashley Drive Cube on the second floor of the Rivergate Tower in downtown Tampa.

“We are thrilled to join Tampa Pride and our amazing diverse community in this celebration of inclusion. We are looking forward to the opportunity to discuss queer culture through the lens of representation. Please join us!” – says Zora Carrier, Ph.D., Executive Director, Florida Museum of Photographic Arts.

Kalup Linzy is a multi-disciplinary artist, best known for a series of politically charged videos that satirize the conventions of the television soap opera. His work has been displayed is in the public collections at The Studio Museum in Harlem, Whitney Museum of Art, Museum of Modern Art, and The Metropolitan Museum of Art.

Rajendra Ramoon Maharaj is Producing Artistic Director and Resident Playwright at the American Stage Theatre Company, St. Petersburg, FL. In addition to his numerous accolades as an actor, director and playwright, Rajendra is a member of the BIPOC Leadership Circle, a nationwide community of BIPOC leaders of cultural institutions to provide support, strategies, and systems of accountability in creating dynamic, new leadership models that center BIPOC experiences.

David Gudelunas, Ph.D., is the Dean of the College of Arts and Letters at The University of Tampa, where he also serves as Professor of Communication. He researches and teaches in the areas of emerging media technologies, gender, sexuality and communication, and communication industries. He is the author of Confidential to America: Newspaper Advice Columns and Sexual Education (Transaction Publishers, 2008) and is widely published in the areas of popular and consumer culture as well as the intersections of sexuality and communication. His work has appeared in the Journal of Homosexuality, Popular Communication and Psychology & Marketing.

Victor Gimenez is the Executive Director of The Tampa Bay International Gay & Lesbian Film Festival (TIGLFF), leading its mission to showcase a selection of compelling films and videos by, for, or about the LGBTQ+ community that Entertains, Empowers, and Enlightens the festival audience. Before joining TIGLFF, Victor was the Executive Director of OUTShine LGBTQ+ Festival in Miami and Fort Lauderdale.

Eye Candy: The Crazy World of David LaChapelle is a documentary by German filmmaker Hilka Sinning (2009) that paints a portrait of photographer David LaChapelle, filmed over four years. Inspired by the great Andy Warhol, eccentric photographer David LaChapelle has created a surreal and boundless world where women are pictured swinging from crystal chandeliers, squashed by giant hamburgers and half-swallowed by sharks. The film tracks the input of his creative entourage as they transform studio surroundings and delves into LaChapelle’s complex sources of inspiration as he grapples with the brutally commercialized and profoundly pornographic industry he both embodies and satirizes with one click of his shutter.