One of the silver linings of this tumultuous year has been the abundance of queer holiday programming…a perfect way to end 2020 on a high note. This year the Hallmark Channel debuted The Christmas House, Lifetime has The Christmas Setup, and The Paramount network premiered Dashing in December…but in addition to those, TIGLFF Director of Programming, Derek Horne, recommends the following 12 new films for the holiday season:

Kate Winslet and Saoirse Ronan star in this 19th century period piece set on the Dorset Coast of England. Loosely inspired by the life of British palaeontologist Mary Anning (played by Winslet) and geologist Charlotte Murchison (played by Ronan), the film imagines a passionate romance that takes place between them. As far as I’m concerned, anytime I get to see my favorite actress Kate Winslet in a new film it’s like Christmas morning. Critics are saying this performance could garner her an Oscar nomination. Although I wish she would get nominated for her supporting role in Blackbird, which is the next film on my list…
WATCH HERE:
https://amzn.to/3mDKAjt 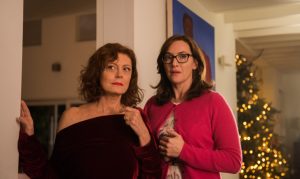 This was my favorite film at last year’s Toronto International Film Festival. The incredible ensemble cast is led by Susan Sarandon as a woman stricken with ALS who is determined to end things on her own terms while inviting her family to spend one last weekend with her. Even though it is summertime, they celebrate an early Christmas together. The other members of the family are portrayed by Kate Winslet, Sam Neill, Rainn Wilson, and Mia Waskowska who portrays their lesbian daughter and non-binary actor Bex Taylor-klaus as her trans boyfriend. The bittersweet film is directed by Roger Michell (Notting Hill, Hyde Park on Hudson) and it is surprisingly very humorous in parts to balance out the pathos. Some people have compared it to The Family Stone (but with less slapstick humor.)
WATCH HERE:
https://amzn.to/3hd2Cb1 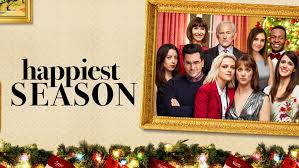 Hulu’s answer to all those Hallmark Channel Christmas movies, this is a much edgier and gay-friendly holiday rom-com starring Kristen Stewart, Mary Steenburgen, Aubrey Plaza, and Daniel Levy (the Emmy-winning creator and star of Schitt’s Creek). In a story that is slightly similar to LezBomb (which we just screened last weekend), Happiest Season revolves around a closeted young woman who struggles to come out to her conservative parents during Christmas, but the lesbian couple are not the only ones keeping a secret in this dysfunctional family comedy about keeping up appearances. The writing is snappy, the acting is heart-felt, and the unexpected situations are amusing in this feel-good comedy that is destined to become a new holiday classic.
WATCH HERE:
www.hulu.com 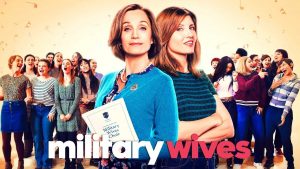 This was the Opening Night Film of the 2020 Annapolis Film Festival (the other festival that I program), and it is now available to watch on Hulu.com or you can rent it from Amazon. Based on the true phenomenon of military wives choirs, this film follows a group of women living on a military base in England who band together for moral support and form a musical choir while their partners are deployed in Afghanistan. And yes…one of the women has a female partner in the military…so there is some queer representation in the film. It’s the perfect heart-warming, inspirational, and entertaining film to watch during the holiday season, complete with an angelic version of “Ave Maria” and a glorious new original song called “Home Thoughts from Abroad.” It is directed by Peter Cattaneo (The Full Monty) and stars Kristin Scott Thomas (Four Weddings and a Funeral) and Sharon Horgan (Catastrophe).
WATCH HERE:
https://amzn.to/38mHdrY 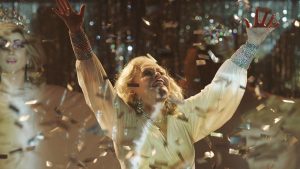 If you missed this film in our summer screening or during the October festival, it’s the perfect time to watch this joyous and inspiring film during the holiday season. This hilarious music-filled comedy redefines family and reinforces the importance of peace, love, and understanding. Two-time Oscar-nominee Jacki Weaver stars as a Christian Baptist choir director who inherits her late son’s drag club in San Francisco and changes her own views as she becomes a guiding influence in everyone else’s life.
WATCH HERE:
https://amzn.to/2LRi4Op 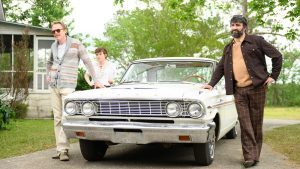 Fans of Alan Ball (Six Feet Under, American Beauty) will enjoy his latest film that premiered at the Sundance Film Festival this year. The story follows a gay college professor who accompanies his 18-year-old niece on a road trip from Manhattan to South Carolina to attend the family patriarch’s funeral. It’s not a Christmas gathering, but it is full of family drama.
WATCH HERE:
https://amzn.to/2LWAEVu 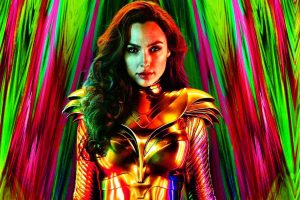 It’s the most WONDERful time of the year… for the return of our gay icon superheroine.
In the hands of the talented director Patty Jenkins, superhero movies are not just generic action films, they are artistically-crafted, gracefully-choreographed, character-driven stories with impactful messages. Her latest film, the long-overdue sequel to Wonder Woman, is already getting positive responses from critics who say it’s the hopeful and optimistic movie we need right now and that it’s also an intellectual blockbuster with more emotion than action. It will no doubt prove to be a fascinating, psychological, philosophical, and political allegory with a “be careful what you wish for” type of theme that will give you something to think about when making your future Christmas list for Santa Claus. It even has a Christmas scene at the end of the movie making it the perfect excuse to watch this on Dec. 25 when it premieres on HBOMax and also in theaters that are open.
WATCH HERE:
https://www.hbomax.com 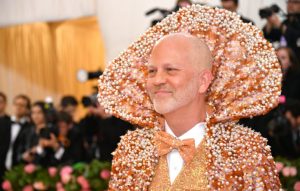 TV producer/director/writer extraordinaire Ryan Murphy (Glee, Pose), has been a leading force in bringing LGBTQ+ stories to television. Now with his US$300 million Netflix deal, he has complete freedom and his latest five projects feature LGBTQ+ characters and themes front and center: Hollywood, The Politician, Ratched, The Prom, and The Boys in the Band Watch them all on Netflix.

The Boys in the Band:

Based on the ground-breaking 1968 Off-Broadway play of the same name, this remake stars the same cast as the 50th Anniversary Broadway revival which took place in 2018 and featured all out gay actors including Matt Bomer, Charlie Carver, Jim Parsons, Zachary Quinto, Andrew Rannellis, and Tuc Watkins. This film takes place in 1968 New York as seven gay friends attend a birthday party where a surprise guest and a drunken game leave them reckoning with unspoken feelings and buried truths.

This mini-series is a revisionist take on the Golden Age of Hollywood in the Post World War II era which shows how things would have been better for minorities if studio executives had been brave enough to make the right decisions. This Dylan McDermott plays a Hollywood pimp (based on the famous Scotty Bowers) that runs his gay-for-pay escort service out of a gas station, David Corenswet plays a hunky male escort who is trying to make it as an actor, and gay Broadway actor Jeremy Pope plays an aspiring screenwriter who hustles on the side while in a secret relationship with a young Rock Hudson. Add to that ensemble, gay actor Jim Parsons playing a closeted talent agent, lesbian actress Holland Taylor playing an acting coach, and Broadway Icon Patti LuPone playing a studio executive, and you have an über gay celebration!

Starring the adorable gay Broadway star Ben Platt in the titular role as an ambitious and polysexual student charting a course to become President. The two seasons of this political satire feature many gay subplots including his mother played by Gwyneth Paltrow who falls in love with Martina Navratilova. His own secret relationship is with his best friend played by the gorgeous David Corenswet (Hollywood). Add to this cast, transgender actor Theo Germaine, lesbian actress Rahne Jones, and gay icons Bette Midler and Judith Light who gets involved in a throuple and you have a total family affair.

Based on the 2018 Broadway musical of the same name, this movie version stars Meryl Streep, Nicole Kidman, and James Cordon as theater performers in need of some positive publicity and so they descend on a small Indiana town to lend their support for an all-inclusive high school prom that would allow same-sex couples to attend.

A visually stylish and colorful feast for the eyes, this 8-episode series stars two of our favorite lesbian actresses Sarah Paulson and Cynthia Nixon in an origin story loosely based on the infamous nurse from One Flew Over the Cuckoo’s Nest. This psychological thriller is probably more appropriate for the Halloween holiday… however the first episode does feature the characters attending a screening of Miracle on 34th Street. Does that count?
WATCH HERE:
https://www.netflix.com
Scroll To Top